Traveling workshop along the wine and olive route

Traveling workshop along the wine and olive route

The workshop aimed to inform the participants about the rural communities of the Central Albania (Tirana-Durrës counties), traditionally known for soft hillside landscapes, lined with vineyards and olive groves, for diverse agricultural and livestock production, rich tradition, culture and human capital but at the same time a territory where the countryside collides strongly with aggressive urban development that threatens the balances and sustainability of the area’s future.

Just as Marcel Proust has stated that discovering doesn’t just mean traveling far to find new things but also looking with another eye at what nature and man have also created next to you, this workshop made us look at it from a different perspective, facts, ideas, realities and characters who often go unnoticed before our eyes, even though they are constantly looking for evidence in their daily efforts towards development and prosperity.

Traveling on the wine and olive route was accompanied by interaction and stops in the wine cellars and olive oil workshops, local businesses and rural communities, as well as direct exchanges with residents. This informal activity allowed the testing of theories and policies against objective reality, as well as the experiences and opinions of residents of rural communities. The workshop included brief introductory sessions and discussions on territorial approach initiatives – an approach that focuses on a small, homogeneous social territory, often characterized by shared traditions, a local identity and sense of belonging or common needs and expectations, as a targeted area for policy implementation.

This event was organized in the framework of the project ‘Consolidating the role of Albanian Network for Rural Development toward a functional model of bottom-up and participatory perspective in national rural agenda’, supported by the European Union and implemented by the Institute for Democracy and Mediation (IDM) in partnership with AgriNET and AgroPUKA organizations.

The interland of wine and olive route

The rural areas that lie in the districts of Tirana and Durrës are rich in vineyards and olive trees, including centuries-old olive trees. The soft hills covered with olives and vineyards have created a suitable terrain for the production of olive oil and wines. Throughout the rural area, there are a considerable number of wineries and olive oil factories known for their product quality, not only in the Albanian market but also internationally. Acknowledging the potential growth of the area, it has been invested over the years by development actors for the creation of Interland Wine and Olive Road to connect producers with each other and turn them into tourist destinations visitable throughout the year.

The wineries that we had the opportunity to visit produce various types of high-quality wines well known in the international market. They offered wine tasting opportunities, visits to the wineries and vineyards around them. Similarly, the olive oil workshops offered to visitors the opportunity to follow closely the process of processing olive oil, tasting of olive oil and olives, and visits to centuries-old olive groves. Many of the products from the workshops have also won awards at international fairs thanks to the quality and characteristics of the extra virgin bio-olive oil they produce. 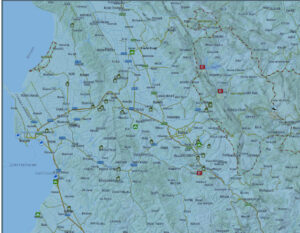 The workshop focused on presenting and discussing initiatives regarding territorial approaches – an approach that focuses on the targeted area for policy implementation which is a small, homogeneous social territory often characterized by shared traditions, local identity and a sense of belonging and shared needs and expectations. Having such an area as a reference facilitates the identification of local strengths and weaknesses, threats and opportunities, endogenous potential, and identification of key barriers to sustainable development[i].  Considering the territorial development-based approach, identifying a subregion with shared development potentials would help to identify possible intervention scenarios to promote the economic and territorial development of communities crossing the wine and olive route.

The Wine and Olive Route community represents a community with cultural and territorial specificities. The territorial identity and developmental cohesion of the whole area becomes an important cornerstone for the sustainable development of the area. For this reason, a general presentation on the LEADER approach, including key features of the approach, concrete steps for the practical implementation of this approach, etc., was developed to foster discussions with participants.

“This area is very suitable for the creation of a Local Action Group. However, it is essential that all stakeholders sit on a table to discuss and this process to be characterized by mutual trust”- said one of the participants in the workshop.

Discussions were focused on the following questions:

The discussion was also stimulated by the information that the LEADER approach is a measure of the IPARD II Program, expected to be supported in the coming years. One of the expected outcomes of the event is related to the encouragement of local actors, both public and non-public, in initiating an animation process of the territory and local actors for the creation of a Local Action Group on the wine and olive route. Such an initiative would represent the instrument to valorize all the territorial potential and enrich the tourism offer of the area, which would promote sustainable rural development in the local community.

The following is a summary of the main discussion topics during the traveling workshop:

The meeting of the Albanian Network for Rural Development Board was also part of the event agenda. The most important decision agreed upon relates to the organization of the second Albanian Rural Parliament. Specifically, the Board decided on the organization of four regional rural parliaments during February 2020:

Following the organization of the four regional parliaments, the Albanian Rural Parliament II will be organized in March 2020.

‘Charles Telford Ericson’ National Vocational High School, Golem, Kavaja, was one of the last stops planned in this traveling workshop.

Founded in 1925, the school has laid the foundation of a modern institution in the field of vocational education, as well as the application of contemporary methods in Albanian agriculture and livestock.  Already modernized and adapted to the demands of the labor market, the school continues successfully its activity in preparing the Economics and Agriculture Specialists of the future. School administration and staff get us acquainted with the school, its history, achievements over the years and its current challenges.

Below is provided a brief information[ii] on the wineries and olive oil factories we visited on this trip:

The ‘3 Friends’ factory processes a variety of white and black olives. The factory offers the opportunity to visit its premises and see the process of processing olive oil for foreign and domestic tourists. The products of this factory have been presented at national and international fairs, earning quality certificates and recognition.

It is a family run by the five Shehi brothers that intertwine modernity with the traditional setting among olive groves, different varieties of grapes and different fruit trees. The winery offers wine tasting and traditional products.

Herta winery is run by the Osmani family. The winery includes vineyards consisting of Cabernet Sauvignon, Merlot, Trebbiano and White grape. It is a family investment that combines the new spirit and the experience of generations. It also offers various kinds of baked bread, as well as artisan goat cheese to the guests.

The winery is known for its very high-quality and very special in fragrance and taste wines. Thanks to the long experience of fifteen years of work in most famous wineries of Tuscany, Italy, and based on the ancient Albanian tradition of vineyard cultivation and winemaking, its entrepreneurs have turned the winery into a favorite agro-tourist destination.

[ii] The information on the above-mentioned enterprises is based on the Wine and Olive Route Catalog, developed by the Agency for Regional Development 2 and the Ministry of Tourism and Environment.

Photos of the activity: