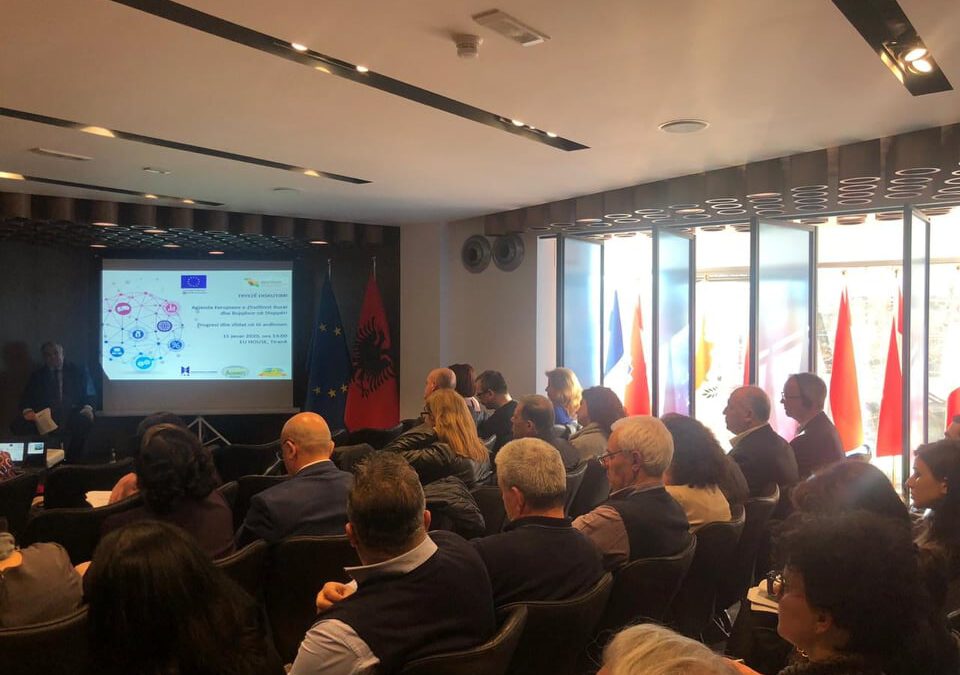 The Albanian Network for Rural Development (ANRD), with the support of the Institute for Democracy and Mediation (IDM), organized on January 15, 2020, at the premises of the EU House the Round Table ‘European Rural and Agricultural Development Agenda in Albania: Progress and future challenges ‘. About 40 participants, including senior representatives from main institutions of the sector, members of the IPARD II Program Monitoring Committee, key donors supporting agricultural and rural reforms, academics and experts, representatives of ANRD member organizations and other active actors of rural and agricultural development attended this roundtable.

The discussion roundtable, as intended, shared the findings and recommendations of the Civil Society Monitoring Report on the Implementation of the National Plan for European Integration (NPEI) | Chapter 11 Agriculture and Rural Development. The monitoring report was drafted during August-December 2019 and aimed to provide an overview of the progress of agricultural policies and rural development in the context of the implementation of the NPEI for the period 2009-2019, with a focus on legal and institutional capacity as well as to provide evidence-based recommendations to encourage public debate on alignment with EU requirements.

The NPEI Monitoring Report, Chapter 11 Agriculture and Rural Development, is a reflection of the efforts of the ANRD and its constituents in monitoring and analyzing agricultural and rural development policies and in encouraging public participation in the country’s accession negotiation process in the EU. Such a monitoring exercise on the effectiveness of the Albanian Government’s efforts and work in implementing European integration commitments serve as an impetus to create spaces and foster citizen participation in EU Acquis approximation reforming processes in the agriculture and rural development sector.

The roundtable was opened by the National Coordinator of the ANRD, Evelina Azizaj, who welcomed the participants and emphasized that such an activity makes part of the efforts to consolidate the role of the Albanian Rural Development Network in the process of alignment with the EU rural development policy in the framework of the  EU funded project. ” Due to the action, the Albanian Network for Rural Development and its constituents will represent a crucial actor in a number of concrete initiatives and processes that advance rural communities’ interests and accelerate the rural reforming processes ” – underlined Ms. Azizaj in her address. 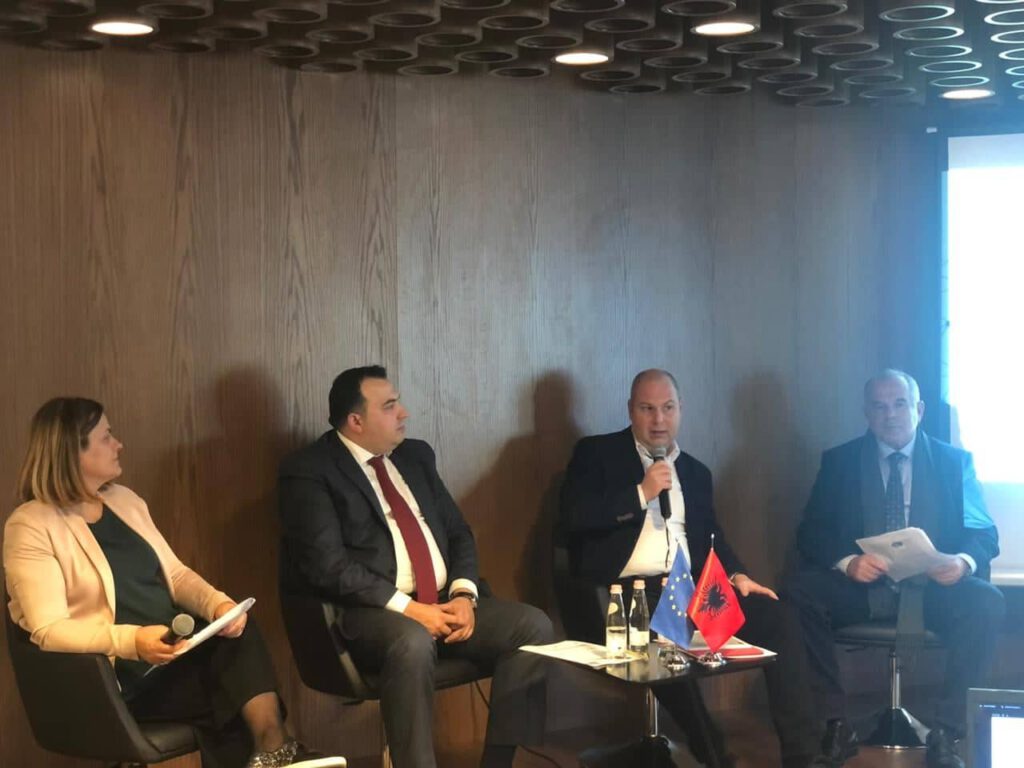 Civil society has an important role to play in ensuring a sustainable European integration process. In this context, the first panel discussions focused on the role of civil society in the reforming processes of the agricultural and rural sectors.

Mr. Sotiraq Hroni highlighted the role of civil society and challenges that hinder it from playing this role. Mr. Hroni brought to the attention of those present the role of the ANRD as one of the most important civil society organizations that have given a key contribution in advocacy, lobbying, capacity building, social capital creation etc. There are still critical issues that require attention and more involvement of civil society, such as the 100 Villages Program, capacity building of the country for absorption of external assistance, strengthening of the role of municipalities in rural development, adoption of the legal framework for Local Action Groups (LAGs) and the creation of tripartite partnerships, etc. At the conclusion of his speech, Mr. Hroni also presented the platform of the Albanian Rural Parliament II, which will be organized by the ANRD in collaboration with the Agricultural University of Tirana on April 2-3, 2020.

The main themes of the Rural Parliament II are: a) The new Cross-Sectoral Strategy of Agriculture and Rural Development; b) Improving the National Support Schemes for agriculture and rural development; c) Rural youth movement; d) LEADER approach. The motto of this Parliament will be: Let’s integrate Albania into the region (this motto is related to approximating the budgetary support of agriculture and rural development in Albania with the countries of the Western Balkans). In the end, Mr. Hroni addressed the Ministry of Agriculture and Rural Development through its representatives at the meeting, a sincere plea and a request for collaboration.

Mr. Enea Hoti, Secretary-General of the Ministry of Agriculture and Rural Development emphasized that the activity has been welcomed by the Ministry and the topic is considered a key issue. While much work has been done concerning the Ministry’s efforts in communicating sector processes and reforms and ensuring stakeholder participation, there is still room for improvement.  Mr. Hoti underlined that farmers’ groups are Ministry’s first partners and that Ministry’s relation with them has improved. Also, Mr. Hoti further informed on the current status of the LAG legal framework, cooperation between the Ministry and UBT on supporting scientific research, encouraging youth engagement in agriculture, revitalizing agrotourism activities, etc. At the conclusion of his speech, Mr. Hoti reiterated that MARD is open to cooperate with the civil society.

The EU is an important donor in terms of the support it offers to CSOs for boosting their role and contribution to the integration process. Mr. Ghitescu, Program Manager for Agriculture and Rural Development at European Union Delegation in Albania, underlined that opportunities for the involvement of civil society in the process of formulating, implementing and monitoring public policies should be created and promoted. According to Mr. Ghitescu, active listening to people and communities is of primary importance and an issue civil society can greatly contribute to, especially during the negotiations and preparation for the EU accession process. He said inter alia: “Civil society should help people understand that the outcome of Integration is not an abstract issue, but linked to achieving a better life… The LEADER approach is of particular importance because it is a new way of prioritizing the needs of rural communities. ”

Ms. Lauresha Grezda, Director of Agriculture Development, Food Security & Rural Development Policies & Strategies, stated, on the course of the meeting, that engagement and involvement of civil society and stakeholder consultation are increasingly being recognized as useful by the Ministry. In addition, because of the complexity of agricultural and rural development reform, cooperation among all actors is really necessary for the process.

Ms. Grezda informed the participants on the new agricultural and rural development strategy that is being prepared with the support of GIZ as well as the strategy development calendar of activities that will be presented in the short run, a process where stakeholders will be part of the working group. In response to the findings of the report, Ms. Grezda showcased  the latest progress: 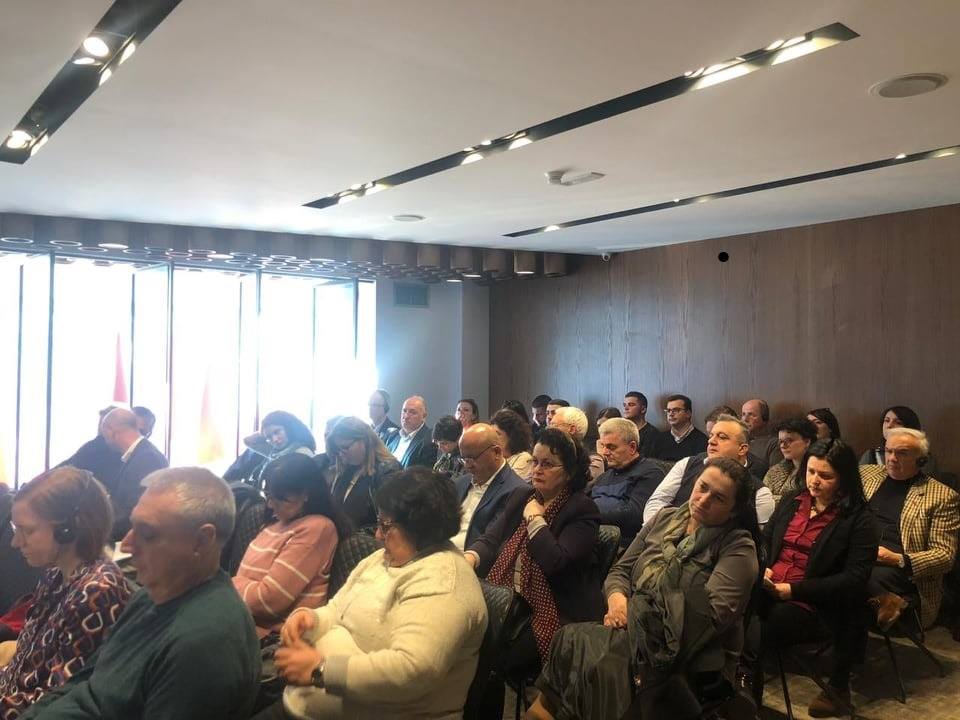 Invited to the panel in the role of the key commentator was also Prof. Fatbardh Sallaku, Dean of the Faculty of Agriculture and Environment, Agricultural University of Tirana. Prof. Sallaku in his speech welcomed the initiative and praised the contribution to and seriousness of the ventures undertaken by the ANRD, identifying the need for civil society presence even in the most remote rural areas.

Considering the discussions in Parliament Rural I (2017), he argued that problems have remained still unresolved from the last two years. Prof. Sallaku  highlighted the need for analyzing ISARD indicators to obtain a realistic picture of the situation and inter alia mentioned: “Several issues are still unsettled, foremost the land ownership issue, the failure of which will lead to the failure of any policy in the field of agricultural and rural development.”

Albora Kacani, participant, representative of the National Federation of Communal Forests and Pastures addressed the audience by emphasizing the need to place in the focus of the policies the farmers and the integrated approach. On behalf of the Federation, Ms. Kacani urged the involvement of the forestry sector in drafting the new strategy. At the conclusion of the meeting, Ms. Azizaj emphasized the importance of open and fair discussions that focus on the real problems of the sector progress. Good awareness of the issues brings people closer to the solution. And yet, despite the commitments and dynamics of agricultural and rural policies, the need for more advocacy and political will to realize the targeted reforms is evident.

Rural Parliament II is an advocacy mechanism that aims to provide more support and political will. There is also a need to improve knowledge on the accession process, on European and EU processes in general for stakeholders and the public at large. While the lack of knowledge about the processes is evident and the challenges in the sector’s processes and reforms are not easy, however, there is interest and enthusiasm among the civil society organizations involved in rural development that must be used to bridge this gap.

This event was organized as part of the project: Networking for Participatory Rural Development